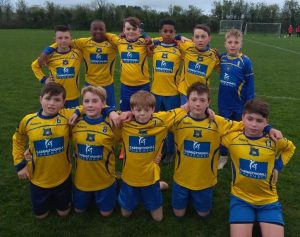 The first half saw their goalkeeper lying idle with virtually nothing to do as they were pinning Midleton in their own half. Midway through the first half, the first realistic chance came when Leroy’s trickery past two defenders on the right side saw him hacked to the ground for a penalty. Up stepped Jayden who missed. Moments later Midleton threatened with their forward finding gaps in the Carrigtwohill defence before a combination of Colm and Seb cleared the ball out of danger

In the second half, against run of play Midleton found their way down the right side to cross the ball into the box for a simple finish. Trailing by a goal to nil the Carrigtwohill lads turned it on as Leslie dropped to right wing and Dennis moved forward where he threatened with pace and trickery.

Under pressure Midleton cleared the ball from their own box and it nicely fell for Rory Dolan outside the box to rifle a beauty into top corner that was a replica of his winning goal against Douglas Hall.

The lads started pushing for a win until a good interception by Alex O’Sullivan at the back found Alex Kingston, who fed Dennis before laying the ball off to Leroy who had an easy left foot finish.

Midleton looked menacing and their left sided attacker forced Carrigtwohill to swap Leslie with Dennis as a defensive move. That worked as Leroy collected the ball from deep to find Leslie who found the speed to outpace the on rushing defender before striking from distance to put the game to bed.

On a day that they struggled without their dependable midfielders, Alex Lombard was gutsy, tackling and carrying the ball forward and getting to the second ball first to win Man of the match.

It’s left to see if we can maintain the run for a possible league win.

Player of the Match; Alex Lombard and Dennis Sitarek