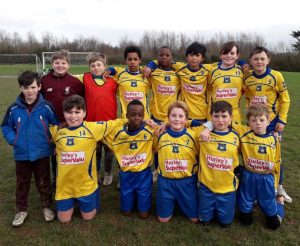 Leeside came to Ballyadam after winning all their matches with only one draw to date. Carrigtwohill knew that a win would put them in the running for the league title and that this was a must win game involving the top two teams.

Carrigtwohill set up their team offensively to try to upset Leeside as early into the game as possible. Their recent 6-2 cup win, with Rolie scoring 4 of those goals, gave them confidence.

The game was well balanced, but Carrigtwohill looked the more likely team to score.

Leeside looked dangerous from midfield and occasionally caught Carrigtwohill for pace on the wings.

The first clear chance was carved out by Leeside forcing Seb to sprint to thwart the Leeside number 9’s efforts. Moments later Rolie playing upfront looked threatening with his pace.

Moments later, Leeside came back strongly and threatened but their striker was limited to shots from distance as Amany stuck with him wherever he went.

They say you never keep a good man down, and the Leeside striker found his way to poke a shot through Sebastian legs for an equaliser.

Sensing danger Carrigtwohill upped their game with quick passing and switching the ball into the channels where their 2 frontmen worked their socks off getting to every loose ball that came from midfield.

Leroy bustled and hustled from the right where he found his strike partner in the box who scored his second for the day. Despite getting caught few times through the middle it was Carrigtwohill who made most chances and shots on target.

The second half came and another mazy run by a Leeside attacker, under pressure from 2 of our players, forced him to cross the ball into the box that unfortunately ricocheted for an own goal at a time.

Incessant pressure from our 2 frontmen started taking its toll on the seemingly tired Leeside backline and another shot on target saw Rolie bundle the ball into the net to complete a hattrick and 3-2 lead.

A quick rearrangement saw Rolie dropping to midfield and Leroy playing a lone role upfront. Our back three became more solid as Colm, Alex and Brian managed to absorb the pressure

When the final whistle came, Carrigtwohill felt as if they had won the league, as this was the first defeat for Leeside and it took Carrigtwohill to the top of the table