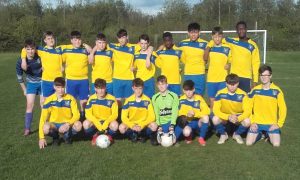 Following a comfortable league win against Tramore Athletic the previous Saturday,  the Carrigtwohill Under-16’s turned their attention to the ‘John Cooke Cup’ and a home tie against Ringmahon on Tuesday evening.

This was a disappointing performance against a side two divisions above them and would see Carrigtwohill exit the competition at the first time of asking.

An early goal conceded by the home side put them on the back foot and they just could not get going for the majority of the game. Ringmahon added a second on 27 mins and it should have been more by the break.

The second half followed a similar pattern and anything the home side tried just didn’t come off. The tie seemed to be put to bed on 63 mins when the visitors added a 3rd but a couple of minutes later after good pressing, Calvin nicked the ball from the Ringmahon centre half and sat the keeper down before slotting home to give Carrigtwohill a glimmer of hope.

It was like flicking a switch and the home side came to life! The final 13 mins of the game were played at a frantic pace with Carrigtwohill having a goal disallowed for offside when Niall glanced a header in from Calvin’s cross and Harte was again denied when put through by David Joseph. Liam Scriven would see his header crash off the post from Ronan’s free kick but it was too little too late and the visitors would grab a breakaway goal at the death to make it 4-1.

With two big games coming up over the weekend we must start as we finished on Tue night to have any hope of extending our season!