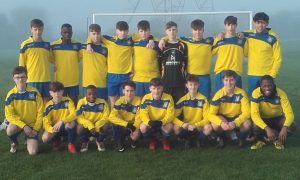 The draw for the U16 local cup saw  Carrigtwohill handed a home tie against North Cork outfit Park United. Park, unbeaten in the league and currently sitting at the top of division 2, would be a stern test for this Carrigtwohill side two tiers below them. But this is the cup and league standings count for nothing! Both sides had good support and everyone in attendance were in for a thrilling morning of football.

This game had everything, end to end football, crunching tackles, goalmouth scrambles and goals….plenty of goals!

Carrigtwohill were straight out of the blocks and from a throw on the left put together 4 or 5 one touch passes only for David Joseph to miscue on the final ball across the box. Park responded with a chance of their own with stand-in keeper Alex Sheehan saving well for Carrigtwohill. The home side continued to press and came close again this time Calvin and Niall combining well up front only for Niall to see his effort float over the cross bar. The opening goal came on 15 mins and it was a speculative long range strike from a Park midfielder that skimmed the wet surface and flew under Alex’s dive. This didn’t deter the home side and they were quickly on the front foot again, good play from Eric and Lorcan on the left saw a ball fed into a central area for Liam Scriven to hit and Calvin also spurned a chance after being put through by Eric.

On 27 mins Carrigtwohill got their reward when Liam found Niall in space and he in turn put through Calvin who made no mistake with the finish. Park came again and using the flanks their pacy wingers were a handful for full backs Ronan and Eric but the central defensive pairing of Mark and Henry offered the cover needed.

Carrigtwohill again would create chances before the break and from one attack, Calvin was brought down inside the Park United box, he dusted himself down to take the penalty kick but the Park keeper saved well, nothing to separate the two sides at halftime.

Cian Leahy replaced Adam Rooney at the restart and slotted in at left back with Eric moving into midfield. The action resumed and David found himself in on goal only for the Park keeper to deny him. But he would get his goal on 54 mins after a good run by Calvin caused problems for the Park defence, 2-1 to the home side and deservingly so.

Again, Park threatened and from a corner somehow managed to scramble a loose ball home for the equaliser. The next ten minutes were fiercely contested and in fairness to the match official he did well to keep a lid on things, although he did brandish a few yellow cards.

When Carrigtwohill were awarded a free kick 30 yards out Liam lined it up and struck a great ball, the away keeper could only parry it out and Calvin pounced to put the home side ahead again!

After working tirelessly on the left Lorcan was replaced by Darragh. Park pushed again for an equaliser and it came with 7 mins to go, for once the Carrigtwohill defence failed to deal with a floated free kick into the box and the Park forward reacted quickest to steer the ball home. Park were reduced to 10 men in the latter stages and with extra time and penalties looming Carrigtwohill would go in search of a winner…..and a winner they would get!

From a set piece, Ronan’s free kick into the box caused problems for the Park keeper and Niall Harte was on hand to finish well. But there would be time for a last scare, Park were given a free kick on the edge of the Carrigtwohill box and the ref indicated this would be the last play of the day, the kick was well struck but Alex would make a great save and turn the ball around the post, 4-3 to Carrigtwohill at fulltime.

A tense end to a thrilling cup tie, with so many outstanding performances (Alex, Eric, David) man of the match goes to captain Henry whose organization, commitment and leadership echoed through the side today, well done to all involved.

Player of the Match: Henry Keyes