Carrigtwohill U13 V Everton A

Carrigtwohill U13 V Everton A

Starting on the front foot Carrigtwohill took control of the game and took the lead when Charlie broke past the Everton defence to score to make it a one nil lead.

The second goal followed when Phillip, after some great team play gave the goalie no chance. Another goal from Phillip followed which actually reflected the total dominance of the home side all over the pitch.

The second half mirrored the first which resulted in another 3 goals being scored for a comfortable win. This was a great team performance from all the lads including the 3 Under-12 players brought in for the day and who equipped themselves very well.

Player of the match goes to Phillip Slewa who scored four goals – the best of them his fourth when he broke past 2 defenders before smashing the ball into the far corner of the net to give the goalie no chance.

A great team performance which needs to be brought to the upcoming league games. 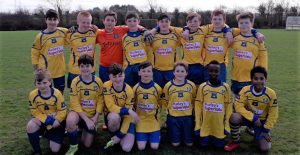