Carrigtwohill made the short trip to Blackrock for their penultimate league game of the season to against league winners Avondale United. After giving the opposition a guard of honour before the game Carrigtwohill started the game well. Unfortunately, they conceded a very good goal. Despite this, the lads continued to play football and went in at half time just 1 down.

The second half was the same as first with Carrigtwohill solid at the back and Ben marshalling his defence expertly. Despite chances at both ends there would be no other score and the game finished 1-0 to the hosts.

This was a great performance from all 12 lads on the day against an unbeaten Avondale and the lads can take great encouragement from this performance. Player of the game goes to right back Charlie McCarthy who is improving by the game in his new position.

Player of the Match: Charlie McCarthy 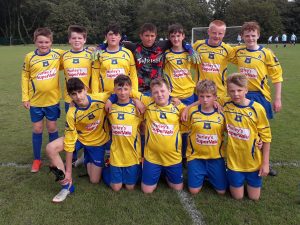