Despite other clubs being close to Carrigtwohill, the CUFC vs Corkbeg AFC fixture is the ultimate derby for players born in 2002. Often placed in the same divisions, with many players going to the same school, these two teams know one another like no other teams in the county.

This has delivered intense and hard-fought matches in recent years with successes for both teams as well as a good few draws.

Having been beaten in Whitegate last October, CUFC were not in the mood for being at the losing end again. Yet, it was the visitors that started (much) better, scoring a wonderful goal within 4 minutes. Still asleep, Carrigtwohill’s defence failed to put in a tackle and gave enough time for the Corkbeg forward to adjust and strike into the bottom right corner. This was just the start that Carrigtwohill did not want, with the manager on the touchline strangely silent despite the lovely sun shine and deceptively warm weather.

Despite this catastrophic start, CUFC started producing the better football and dominated for long periods in the first half. In the middle of the park, Sidas Pilivicious had a superb afternoon, controlling the ball, directing play and recovering the ball numerous times with astute tackles.

However, lack of composure in the last third prevented the home team from getting a precious equaliser. This was despite the tireless efforts of Anesh Swanai who ran so many times down his wing to cross the ball in the box that his legs would finally give up with 15 minutes to go in the second half. Front man Evan Donnelly had a chance to draw level from one of these crosses, but his volley evaded the target.

A half time reshuffle brought Rian Notley up front and renewed energy into the team but the equaliser still was not coming, until the 60th minute where Man of the Match Jason Daly powered through the field from centre back one more time. Only, this time, he did not stop at the halfway line and pursued his drive all the way to the box, dribbling his way through the central defence to beat the Corkbeg keeper from close. This was a just reward, but probably an unlikely way to get it. What a goal from centre back anyway!

This goal changed not only the scoreline but the whole game as Corkbeg really came out fighting and the game completely evened out. The pace became frantic and the engagement went up three notches. After 10 minutes of end to end stuff, Abdul Mohamed created havoc in the Corkbeg defence and put Rian through but the goalkeeper parried. The ball fell back to Anesh however and his drive was deflected in the net to put Carrig in the driving seat for the first time of the match.

This might have been the final score in a different game, but not in this one as the visitors really threw caution to the wind and pushed in search of an equaliser. By now, Carrigtwohill were down to 10 players, with no more subs and Anesh having retired with terrible cramps in both legs, and Corkbeg’s pressure delivered a goalmouth scramble in which the ball crawled over the line.

The even scoreline presented a dilemma: secure the draw or push for a winner. Both sides decided to go for the latter and the game became even more frantic. Patrick Ejewe fingertipped the ball away on a swinging corner with a Corkbeg attacker unattended at the far post and Rian Notley beat everyone for pace to counter at every occasion. Then, with literally one minute on the clock, the ball came in front of Corkbeg’s goal and fell to Robert Adam 30 yards out. His first touch away from the centre back took the ball on his less fancied left foot but his curled drive went over the heads and the hands of the Corkbeg goal keeper to slot in the top right corner of the goals.

Every coin has two sides and this last minute 3-2 win for Carrigtwohill was a great reward for one team but a cruel outcome for the other. Indeed, this CUFC vs Corkbeg fixture never disappoints…

Man of the match Jason Daly – scorer of the equaliser and very present at centre back. 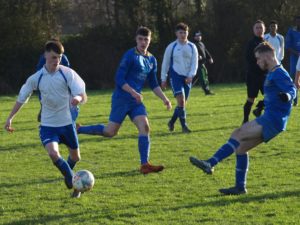 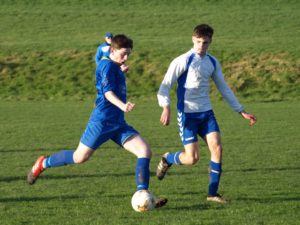 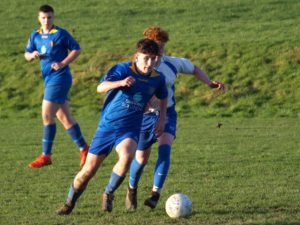 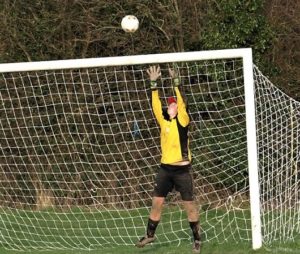 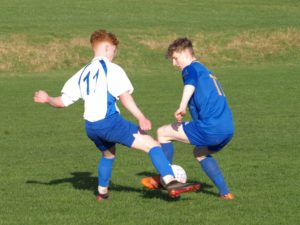 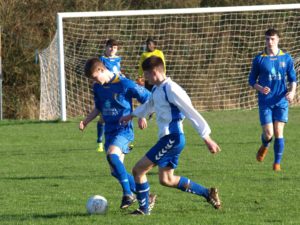 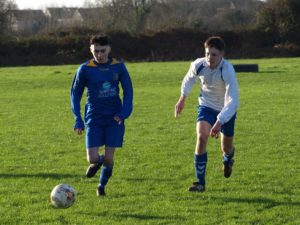 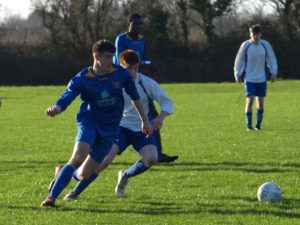 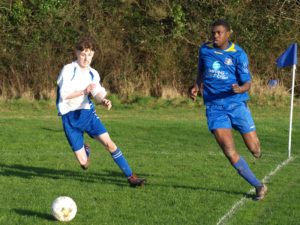 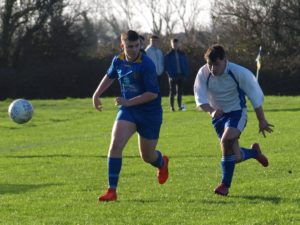 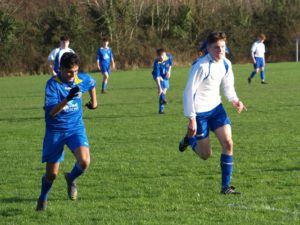