The home side was slow out of the blocks and some poor defending allowed Crosshaven to score in the 2nd min. Carrig sensed it could be a tough 80min ahead.

31′ saw sustained pressure pay off when throw in from Kevin to Mac who found Dan C who passed it past the keeper. 1-1. 33′ goal from Daniel C nearly carbon copy from previous goal. 2-1. HT 2-1

42′ intricate passing move involving Daniel Mac, Rory and Kevin without end result. 45′ free on edge of box taken by Brian tipped over by keeper. 51′ Free kick from 25 yards from Kevin well saved from keeper. 52′ Crosshaven on top and corner ball to back post gave the deserved equaliser. 60′ Goal ruled out for offside after Daniel Mc tucked it away, close call from the ref.

Very close tie with both sides pressing. A tactical change from the coaches moved Shane D to the right wing. Within a min he made a great breaking run down the right and found Daniel Mac who finished to the back of the net. 3-2 Carrig  78` throw in from Alex O results in a free for Carrig. Ball in breaks back to Daniel Mac who glides the ball over the keeper and into the net. 4-2. Pressure from Crosshaven controlled well by Carrig who saw it out with a well-deserved victory. Motm was Noah with a special mention for Daniel C who weighed in with 2 goals and a decent shift on the day.

Player of the Match; Noah O’Neill 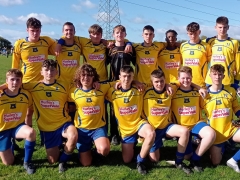