The girls Under-15 squad travelled to Aghada on Sunday morning for a friendly against Corkbeg. The purpose of the game was to give the squad as much game time as possible and management rested the Under-13 prolific strike force.

Carrigtwohill started with a 4, 4, 1, 1 formation. Emily (U12) in goals, full backs of Eorann and Sophie, Katie (U14) and Caitlyn (U12) were centre backs. Maedhbh (U12) and player of the match Avah Murphy (U14) formed a very robust centre midfield paring with Caoimhe and Julia on the wings.

Kate who finished with two goals was playing the advanced midfield role with Alex (U11) up front. Naoise, Sarah, Carragh, Mijka, Abigail were the subs with each playing very well when introduced. Carrigtwohill dominated the early exchanges without ever threatening to score. The hosts had a big physical team out and there were a few tasty challenges in the game. Despite being the younger and smaller squad Carrigtwohill did not give an inch. They battled and got stuck in from the word go. It was their first 90 minute match and there were some very tired and sore bodies after the game. It was fantastic from a coaching point of view to see how Carrigtwohill players grew into the game and how they relished the battle. Although they were exhausted leaving the field they were playing better when the final whistle went. They learned so much in the 90 minutes.

At half time Carrigtwohill were 2 – 0 down but immediately on resumption they pulled one back. Corkbeg went 3 – 1 up and again Carrigtwohill pulled it back to 3 – 2. The game finished 4 – 2 when Corkbeg were awarded a free outside the box and their player struck an expertly taken free kick outside the reach of the Carrigtwohill keeper Emily.

There were so many positives to take from the match. Carrigtwohill battled hard from start to finish, they never left their heads drop and they finished the game exhausted but happy in their performances.

Ask management for two words that sum up this group and it’s “Believe” an “Proud”. We believe in these girls and we are very proud of them 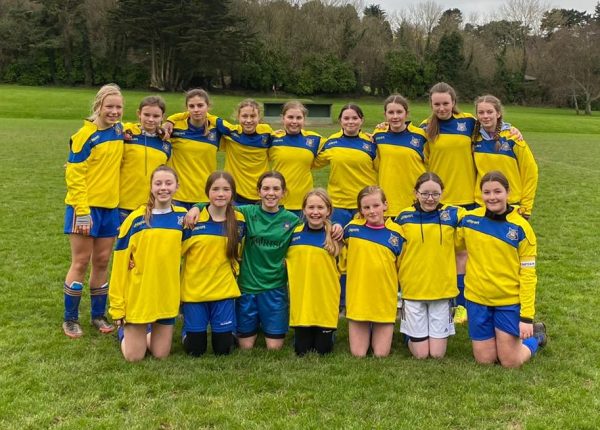