After months of hard training and in-house practice matches the Carrigtwohill Girls Under-15 squad had their first friendly against Corkbeg on Saturday at the astro facility.

The squad was supplemented by a few Under-13 players and registration is still open so take that leap of faith and register now. Fun, fitness and friendships are guaranteed.

Carrigtwohill started with Emily in goals and a back four of Abigail, Katie, Brooke and Naoise. Midfield was Caoimhe, Avah, Kate and Sophie.  Up front it was was Julia and Eorann.

The match was very evenly balanced for the first half with lots of strong tackles going in. Corkbeg got a free from outside the box and an expertly taken free kick had the ball sailing just under the bar and out of the reach of our goalkeeper Emily. This seemed to spur Carrigtwohill to life and management made changes to get a goal back and were rewarded when Sophie Redmond netted a fine individual goal before halftime.

Carrigtwohill started the second half with a firm grip on the game and Amelia, Caitlyn, Sarah, Carragh,  Katlyn and Megan all getting a good run out. In the end it was the class of Sophia Redmond that shone through and Sophia scored another two excellent goals to seal player of the match and victory for Carrigtwohill.

Special mention to Emily in goal who was excellent and Kate Bogue who worked tireless for the team.The match was refereed by Alan Kelly, thank you Alan. Alan gave the girls a very encouraging talk at the end of the game. Selection boxes were given to both squads. A huge thank you to our kind donors. 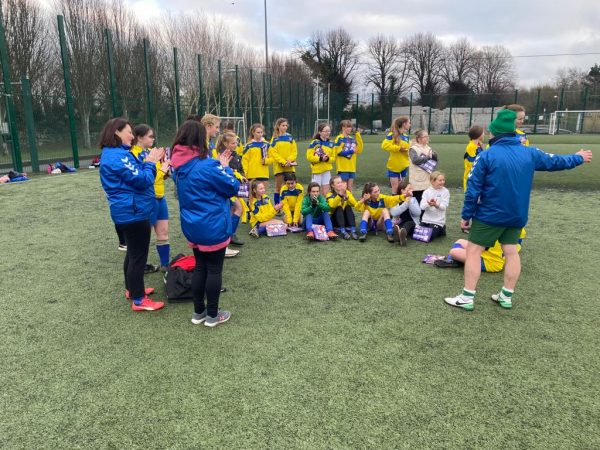