Under-15 Div 4 at Ballyadam

Carrigtwohill United Under-15A welcomed Corinthians to Ballyadam for a return league fixture, having not played since their exciting cup win the previous month.

Carrigtwohill were looking to keep their unbeaten run in division 4 going but a sluggish start from the home side playing into the wind saw them concede in the 16th minute with Corinthians scoring from close distance due to our defence not taking responsibility to clear the attack. However, the defence grew stronger as the first half went on thwarting any attacks from their tricky no7.

The halftime talk had to be honest and firm to try get the lads going. The second half started, and a change in formation and the Carrigtwohill subs came into the game – two of whom came up from the Under-14A team. Charlie and Martin slotted straight into the team, showing great skill and intelligent through balls to win some corners.

One of these corners gave Carrigtwohill the opening they needed –  a left legged corner whipped in by Kevin, over their tall keeper and finished back of the net.

Carrigtwohill kept the pressure on and won another corner on opposite side, Kevin again taking this one and putting it into an excellent area for striker Ryan to rattle the net.

Corinthians were always going to be a threat and they had a few crosses sent into the box but clever keeper shut out and chance for them to equalise.

On the 53rd min, the home side were awarded a free kick from distance. At this age level with the large goals, these chances need to be taken. A beautiful long range attempt from Daniel C hit the underside of crossbar and bounced back out to midfielder Shane who again hit the crossbar. Somehow Kevin was I right place to slot it past the keeper – 3-1 up with 15min to go.

The lads needed to try contain their lead and changed formation again and that sealed the 3 points with an impressive second half 14 man performance.

Man of match went to Kevin Jones with special mention to our two Under-14 players Charlie Cambridge and Martin Lehane who impressed coaches and supporters alike. Great performances from Wezi, Shane, Rory. 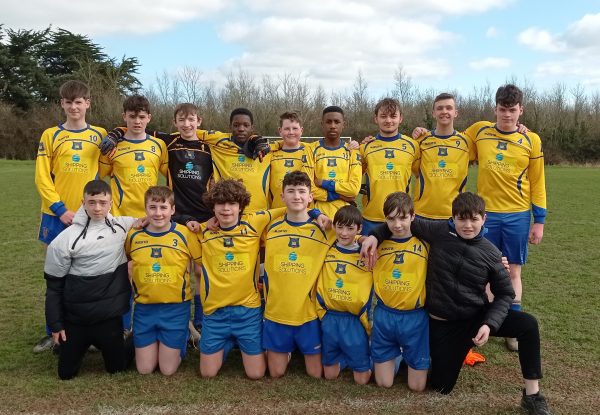