Carrigtwohill United Under-15 A travelled away to Castlecormac for their third away game in a row, sitting joint top of division 4 with Castlecormac having played only one league game so far.

Carrigtwohill started the game on the front foot, with possession releasing Kevin down our left wing and Alex O down the right With Brian, Shane, Rory in midfield, we soon started putting pressure on their back 4, playing decent balls into our lone striker and debutant Ali

The home side were stopping most advances, up until a mistake from their wing back, and good pressure from Kevin, found himself with time in the box to have strike with his powerful left foot, beating the keeper into the top of the net.

Castlecormac had quality for sure but the back 4 of Wezi, Jakub, Daniel C, Alex K kept them from threatening goalkeeper Cillian

For the remainder of first half, Carrigtwohill kept them on the back foot. Adam kept pressure on their goal kicks and they had one more chance before the break  when Brian’s attempt clattered the crossbar. Carrigtwohill 1 up at the halftime break.

Keeping momentum going into second half was key, but within minutes of restart, Castlecormac got into a good position in around the United box and a strike broke through a crowded defence and ended up in the bottom corner of the net. Game on

Carrigtwohill managed to keep cool and started playing decent football using their right wing effectively. Jordan won a few corners, one of which was whipped in, and fell to Shane’s feet who placed it into bottom far corner. Carrigtwohill seemed to be getting a hold of the game finally.

But as we know the game is never over until final whistle. Castlecormac grew confidence and came back to level 10 minutes later. After a nervy clearance from defence, the ball somehow ended up in back of the Carrigtwohill net. 2-2 with 15 minutes to play.

Another debutant Ryan for Carrigtwohill received the ball and eventually broke down the right, got a ball across to near post to lethal striker Daniel MC who flicked it with inside of right boot to take the lead again.

The final 15 minutes were going to be tough and United introduced their fifth sub. Cian was breaking down attacks on the wing and the home side was putting serious pressure on the defence who could not get out of their defensive third. After having to defend needless corners, 4 in fact, Cillian in goals pulled off a spectacular double save in the dying minutes.

Best for Carrigtwohill were Cillian, Alex K, Kevin, Shane, Brian and the winning goal from Daniel MC who picked up an injury before the game but insisted to play some of the second half.

Player of the Match: Shane Daly 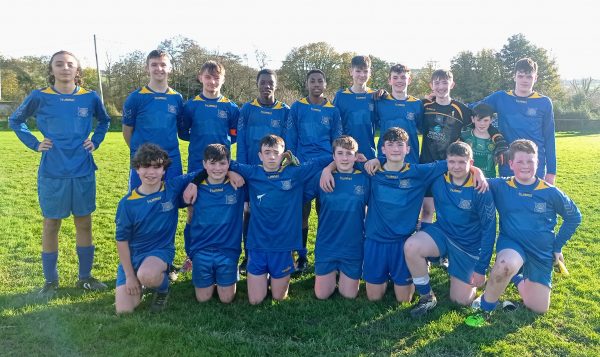