Carrigtwohill Under-14 girls took on Ringmahon in the first round of the National Cup on Sunday 9th October. It was very wet and windy and a horrible day but once again the schoolboys, ehm recently renamed School girls pitch was in excellent condition due to the dedicated work of Aidan, Andrew and Declan.

Carrigtwohill were focussed from the word go and this showed in the warm up. The girls were alert and adamant they were going to put on a show for their managers and supporters.

A lot of sport is being played at present by the girls and a few had played Camogie a few hours earlier so huge credit to the girls for the effort they put in.

Carrigtwohill started with purpose and were pressing and probing down the wings with no luck, but they were creating lots of chances in the opening few minutes.

They broke the deadlock on the 8th minute. Carrigtwohill were awarded a free-kick about 25 yards out from goal and up stepped midfield powerhouse Maedhbh Carroll to rifle an unstoppable shot over the wall and just under the crossbar.  Ringmahon kicked off and quick as lightning Amelia Sheehan scored a superb goal. Lily and Amelia hunted all day long and whilst lily didn’t score today she played a huge part in the victory. The third goal came from a pre-rehearsed short corner again dispatched with aplomb by Maedhbh. Maedhbh rounded off a hat-trick 5 minutes later. Ringmahon then put three up front and pushed hard on the defenders and they capitalised on a bit of hesitancy in the Carrigtwohill rear-guard to make it 4 – 1. Carrigtwohill stayed calm and composed themselves and dealt well with the new threat.  Any thoughts of a Ringmahon comeback were crushed when a quick fire double from Sophia and Amelia just before half-time had Carrigtwohill 6 – 1 in front.

In fairness to Ringmahon they have some very good players and are very well coached by a very gracious management team. Definitely the best team we have played this year and it’s easy to see how they decided the destiny of the Division 2 title on the last day of the 2021/2022 season.

Carrigtwohill had 15 superstars yesterday, Emily in goal is improving with her distribution all the time. Defenders don’t come more committed and tenacious than Alex, Brooke, Caitlín, Megan and Sarah, Midfield of Maedhbh and Anna and Kaci and Clare are very formidable and on the wings we have the wizardry of Sophia and Kinga and Rebecca. Up front the deadly assassins of Lily and Amelia. There is a super bond between the girls that will last long after their boots won’t fit and their medals are covered in dust.

Back to league action next week. 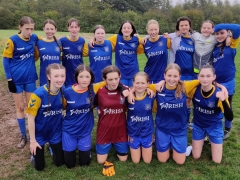