The newly promoted Carrigtwohill girls U14 team are enjoying their start to life in Division 2.

They have started the season really well. First off were two friendlies where they beat Watergrasshill 6 – 2 and they beat Avondale 4 – 3. It was then time for the league to begin.

First off it was Ringmahon at home with Carrigtwohill catching the visitors from Mahon cold and recording a comfortable victory. Then it was an early morning trip away to Macroom with the visitors proving far too clinical for the hosts.

So this Saturday it was a top of the table clash with Kanturk. Carrigtwohill prepared well for the game but in the warm up management sensed a lack of urgency and application from the players. However when they touched off to start the game their captain had the ball in the net within ten seconds, yes ten seconds. The ball was played back to Maedhbh from tip off and Maedhbh launched a superb ball forward to Amelia who took the ball in her stride to slot home past a shell shocked Kanturk goalie. This should have been the perfect platform for Carrigtwohill to kick on and dominate their opponents but their display for the remainder of the first half was poor. They looked uninterested and deflated.

Half time couldn’t come quick enough for the Carrigtwohill management. They let the girls know that their first half application wasn’t good enough. They started the second half with real purpose and after three minutes Sophia Redmond scored a superb solo goal, collecting the ball from Emily in goal, she raced to the half way line unopposed and from there she beat three defenders before coolly slotting the ball home. Again Carrigtwohill failed to kick on and struggled to add to their goal tally due to poor decision making and wayward shooting.

The insurance goal came with 15 minutes to go. An expertly worked short corner between Sophia and Lily resulted in Lily curling an un-stoppable shot into the far top corner  of the Kanturk goal.

Best for Carrigtwohill were Emily. Megan, Maedhbh and Alex and the Joint players of the match the central defensive duo of Caitlín Egan and Sarah Cronin.

So three league games gone, three victories, 28 goals scored, one conceded.  Next up is Ringmahon in the first round of the National Cup. 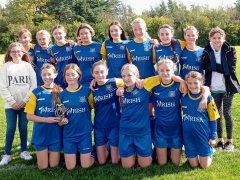