Starting their first match at Under-14, the players got up to speed quickly. Whilst, they had possession of the ball often in the first half, they were unable to convert this possession to goal scoring threats as often as they should. Riverstown took the lead. Alex Kimak equalised before Riverstown scored their second. Lots of positives in the first half and a good performance.

Score at half time 2-1 to Riverstown.

They really began to find their gears in the second half, outstanding performances all over the pitch, Gary Og Horgan scored 2 great goals along with Darragh Culley and man of the match Alex O’Sullivan debuted in goal for the final 15 mins making some very impressive saves and kick outs. Alex had also played brilliantly in the first half as right back. Carrigtwohill won the game 4-2. 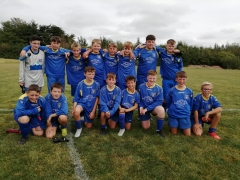