Under-14 Div 1 at Whitegate

Carrigtwohill United Under-14’s made the short trip to Whitegate for a league Division 1 clash with an in form Corkbeg on a sunny Spring morning.

The home side were straight out of the traps stunning the visitors with a well worked goal inside the 1st minute.

This game would turn out to be a thriller having everything from tough tackles to some super football and more cards than some mothers on the day that was in it!

It was played at a frantic pace more akin to a cup tie with both sides throwing caution to the wind and attacking at will. On 18 minutes Carrigtwohill were awarded a penalty following some trickery in the box by Rian Thornhill and up stepped Jarlath Cullimore to strike a fabulous ball only to see it crash off the base of the post, across the face of the goal and away to safety. Ten minutes later Cullimore would get a second bite of the cherry when a Corkbeg defender handled in the box and this time he sent the keeper the wrong way to plant the ball in the right hand corner. By now the hosts were reduced to 10 men and under pressure and were glad to hear the half time whistle, 1-1.

Carrigtwohill continued to tighten the screw after the break making their numerical advantage count and took the lead on 50 minutes through a free kick that Sean Og Madden sent into the top corner from 35 yards, what a strike! Five minutes later Adam Lee claimed an assist as his long punt forward found Thornhill who lobbed the ‘Beg’ keeper from the edge of the box. 3-1 to the visitors and it looked like game over.

Credit to the home side who kept battling away and forced a number of free kicks around the Carrigtwohill penalty area, with 10 minutes remaining one these frees paid dividend when a low shot found the bottom corner. Shortly after United were also reduced to 10 men and were happy to try to see the game out and hold what they had, incredibly Corkbeg found an equaliser 6 minutes into added time following another free kick to deny Carrigtwohill all 3 points.

Best for Carrigtwohill were Cillian Rooney, Morgan Foley and Kyle Kidney but man of the match goes to Sean Og Madden for a terrific game at left back and a super free kick. Well done all. 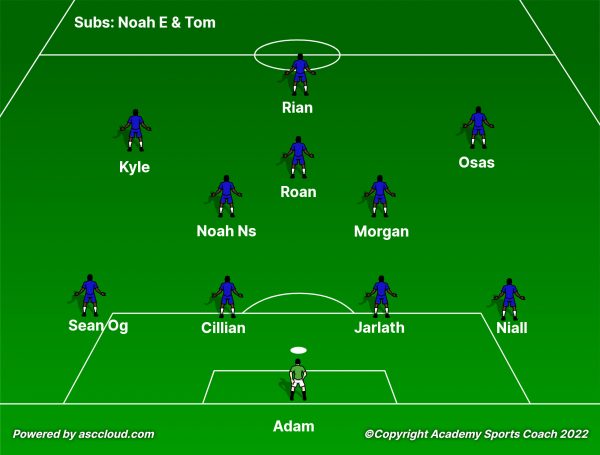