Carrigtwohill were playing away to to Corinthians Boys A on Sunday in the National Cup. It was a game that Carrigtwohill would have been expected to win given their division 1 status.  Carrigtwohill started very strong right from the start, they played a crisp passing game with some lovely passages of play. There were some early chances by Cathal Doyle and Jacob Neumann up front but to the credit of Corinthians, their defence and goalie were proving to be tough opposition.

About midway through the first half Jack Lombard produced an incredible goal from well outside the box to leave the goalie with no chance. Moments later Sean Guiney was extremely unlucky when he had one of his trademark shots come off the post. The half finished up 1-0 to Carrigtwohill.

Overall there were plenty of positives to take away from the match. The entire squad got a good run out in this match, the passing and movement of the players was superb and there were some excellent performances most notably from Conor Nolan and Sean Barry in defence and Cal Flavin who added another clean sheet to his name. In the end it was Sean Barry who got man of the match for an excellent performance which was capped off with a well taken goal.

Player of the match:  Sean Barry 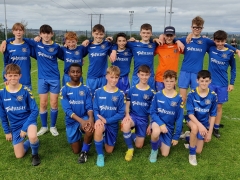 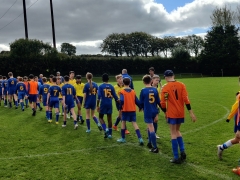