This was the opening match of the season for the newly promoted u14 team into Div. 1. They were up against Bandon, the team who had beaten them 2-0 just a few months earlier to stop Carrigtwohill winning the u13 Div 2 title last season. Carrigtwohill needed to be at their best if they were to get off to a winning start.

Carrigtwohill started the match very confidently. The backline of Sean Barry, Cillian McCann, Dan Guiney and Conor Nolan looked really solid and assured. Cal Flavin in the first half was not too busy but still had to be alert and pulled off a few fine saves and his kick outs were always on point especially when it came to finding the players on the wing. The first half was totally dominated by Carrigtwohill who were playing an excellent passing game. Pol O’Connor and Matti Hodnett had their hands full in the centre of midfield where they were up against a very physical Bandon midfield. Jack Lombard was playing in the defensive midfield role and did a fine job of snuffing out any Bandon attack and launching the attacks.

Carrigtwohill used the pace of Eoin Garvey and Sean Guiney to great effect to attack Bandon down the wings. Hugh Crowley was playing centre forward and was on hand to get a number of shots off.  Carrigtwohill were unlucky not to get a penalty early in the match when Hugh Crowley looked to be pushed over by their goalie in the box but the referee waved for the match to be played on. Carrigtwohill finally did get on the score sheet when Conor Nolan played the ball to Sean Guiney who skinned the defender for pace and scored with a very precise and powerful shot that the keeper had no chance of saving.  To keep up the speed and intensity down the wings, Sophia Redmond and Cathal Doyle were brought on for Eoin Garvey and Sean Guiney midway through the half. Sophia Redmond was extremely unlucky when she chested down a well taken corner and smashed the ball against the crossbar.

The second half started 1-0 to Carrigtwohill but that was not a true reflection of the dominance of Carrigtwohill in the first half.  Michael Aghbo was introduced into the defensive midfield role in his first competitive match and produced a fine performance. Cathal Doyle who was full of running as usual, was extremely unlucky when he had a shot that narrowly grazed crossbar and went over. After a sustained period of pressure, Carrigtwohill managed to go 2-0 up, Sean Guiney took a powerful in-swinging corner into the danger zone that left Bandon scrambling and one of their players knocked it into their own goal. Cathal Doyle eventually got a well-deserved goal when he coolly slotted home a cross to make it 3-0. Bandon pulled one back  but Carrigtwohill managed to see out the match and leave the final score at 3-1. Overall it was a superb performance by the team who seemed to have upped the performance and passing to the next level required for Div. 1. It was hard to pick out a Man of the match because the whole team performed so well. In the end the coaches agreed the Matti Hodnett just got the nod because of his physicality and sublime skills against a much larger opponent, but make no doubt about it this victory was down to an excellent team performance.

Player of the match: Matti Hodnett 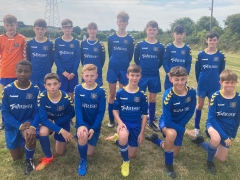 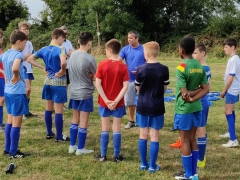