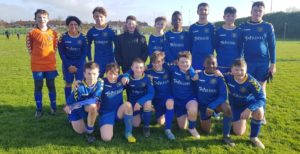 Carrigtwohill United Under-13A travelled away to face Tramore athletic on Saturday in a league clash at Tramore Park.

Having lost their previous encounter 4-1 at home, the visitors were looking forward to prove how much they have improved since then.

The game started with both teams eager to please. Tramore were showing good skill on the ball and the Carrigtwohill back 4 were solid from the start keeping the opposition at bay.

The lads settled into the game and scored the opening goal after 9 minutes. The Carrigtwohill midfield player chased down a pass into space and the Tramore keeper tried to clear his lines but the ball deflected off the Carrigtwohill player to put the ball into the net. Brave stuff from both players.

Carrigtwohill made some changes to bring in fresh legs for the second half, they were on the front foot from the start, creating some good passages off play to give the lone striker a few chances to score.

Tramore were always going to be dangerous on the counterattack and soon enough broke down on the right side and sent a good ball into the box. Somehow the ball ended over the goal line to make it 1-1.

The constant pressure from the Carrigtwohill lads breaking through the back 4 created chance after chance and they took the lead with a great run from their striker who calmly passed the ball onto the awaiting midfield player to slot the ball home.

3 more goals for Carrigtwohill came within the next 10min from unselfish play with great assists. It was great team effort from all 15 players.

The result was 5-1, to give Carrigtwohill a great away win which they truly deserve.

A special mention to club linesman Ethan Collins for doing a great job on the day.

Player of the Match: Daniel Cunningham 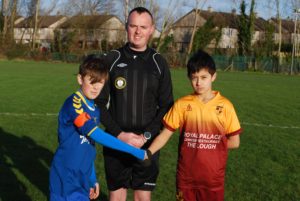 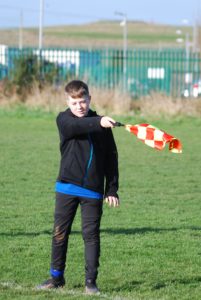