The Quarter-final of the Under-13 Local Cup brought Premier Division opposition to Ballyadam this saturday morning in the form of Blarney United. Blarney had convincingly despatched of Avondale in the previous round earlier in the week with their striker and talisman Charlie Hanover bagging a hattrick. He was one to watch. Carrigtwohill knew that it would take 100% from every player to manufacture a win and game management would be key.

Adam Lee (c) kept goal, he would command a back four of Niall Barry, Sean Og Madden, Cathal Seymour and Jarlath Cullimore. For the first time ever a sweeper/marker system was deployed by and they executed it to a tee with Seymour playing chaperone to Hanover and Cullimore sweeping in behind. In midfield Roan O Keeffe would provide the protection while Tom Walsh and Evan O Regan O’Connor played a less restricted role but also knew they had to graft hard. The attack was led by Cillian Rooney while Kyle Kidney and Rian Thornhill provided the width. In reserve there was ample backup in Osas Aghedo, Noah Eddins, Ronan Mccarthy and Morgan Foley.

It was home side that settled better in the opening exchanges as they contested every ball and used it effectively playing on the front foot and pushing forward. It was obvious that the battle in midfield would have a huge bearing on the outcome and O’Keeffe & co took to their task willingly. On 10 minutes the ball was released from the centre to Thornhill who wriggled clear of his marker and drove a low cross along the 6 yard box. It was met at the far post by Kidney who buried it in the back of the net to put the hosts ahead. This sparked Blarney into life and we now had a real cup tie on our hands with both sides fully committed. Carrigtwohill had to endure some pressure heading for halftime, but Cullimore was playing a blinder at the back and Seymour had limited Hanover to a speculative overhead kick and a shot from distance which Lee saved comfortably in goals.

The second half started with the same intensity and again it was the home side who carried the threat to Blarney with the front three all seeing the ball early on. 5 minutes in Carrigtwohill won a free kick about 25 yards out from the Blarney goal. Madden had already hit the woodwork from a short corner in the first half and really fancied this one. He placed the ball confidently and struck it hard and true over the defensive wall and into the top corner. 2-0 and Ballyadam was buzzing!

To their credit Blarney were not about to roll over and the battle resumed. With 17 minutes to play the visitors caught a break and were awarded a soft penalty for a push in the box.

Lee hadn’t put a foot wrong all morning and looked like a giant in goal, the Blarney captain stepped up to strike the ball to the keepers left and Adam’s outstretched boot duly saved, and the ball was cleared. They were not about to let this one slip!

Reinforcements were introduced in the last 15 minutes to shore things up and see the game out and the boys were terrific. Blarney pinched a goal late on, for once Hanover broke free from his shackles and his finishing is deadly when given the opportunity. Carrigtwohill had to dig in till the end and play on the counter as the official found 7 minutes to add on. But see it out they would with a mammoth display of courage and determination. It’s impossible to award a man of the match to a single individual when every boy played their heart out but special mention has to go Adam Lee, Cathal Seymour and Jarlath Cullimore who were outstanding. Well done to all, semi-final here we come, 😊⚽️ 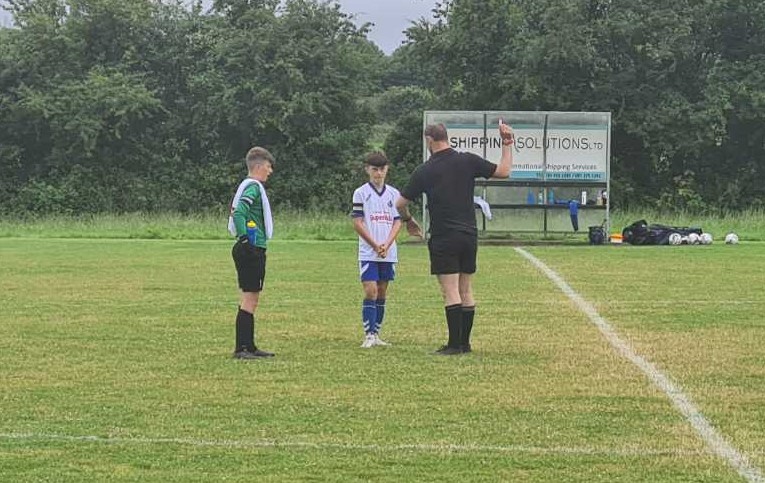