Under-13 Div2 at Beaumont Park

Carrigtwohill travelled away to Beaumont park for their first competitive match in 8 weeks after their last 3 matches were postponed. Aside from the Christmas break the squad had been training hard in the meantime and it was important that they hit the ground running if they were to maintain their good run in the league. The match was a bit scrappy for the first 20 minutes but was played at a frantic pace as both sides tried to get a footing in the match. Rory Nolan started in the left back position was soon into the thick of it with a number well timed tackles and driving runs from the back.

Cathal Doyle and Jack Lombard who were playing up front had some early chances as did Avondale at the other end. At around the 20 mins mark into the game, Cathal Doyle was bundled over just outside the box and Carrigtwohill were awarded a free kick. Pol O’Connor took the free kick and scored an absolute screamer into the top left hand corner to open the scoring in the game. Avondale then began to press more and all the pressure paid off as they managed to draw level when the scored a well taken penalty. Just before half time Carrigtwohill produced a fine team goal when Jack Lombard swept the ball out to Eoin Garvey on the right wing who beat two players to put in a telling cross which Cathal Doyle managed to put away.

In the second half the defence of Sean Barry, Cillian McCann, Dan Guiney and Conor Nolan had their work cut out for themselves but they managed to stay organised and contain a formidable and physically large front line and prevented them from scoring in the second half. The midfield of Eoin Garvey, Matti Hodnett, Pol O’Connor and Sean Guiney ran tirelessly, put in tackles and created chances for the forwards. A special mention has to go to oalie on the day Bart Majcher who was called up from the u12 Squad at short notice and put on a superb display.

Sophia Redmond who was playing back to back matches on the day (who had already scored a hattrick in her previous match) was the next on the score sheet with an unbelievable shot from just outside the box into the top right hand corner to put the score at 3-1.

Matti Hodnett finally made it 4-1 with a fine individual goal as he weaved his way into the box and even though he lost balance managed to score with a stunning shot into the left corner.

The final result put Carrigtwohill second in the league with the chance to go joint top if they win their game in hand.

Man of the match was Daniel Guiney who produced a masterful display in defence and put in some telling challenges when Carrigtwohill needed it the most Goal Scored by Pol O Connor definitely worth a look here https://fb.watch/aJyHipzyVs/ 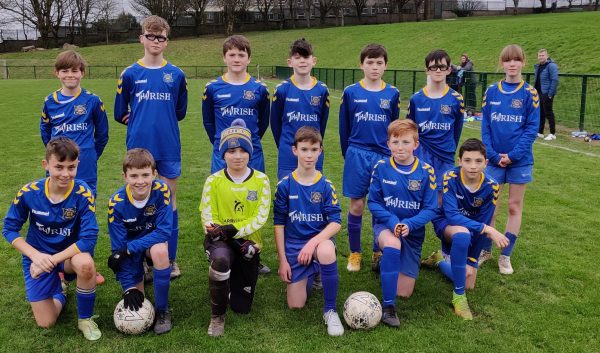