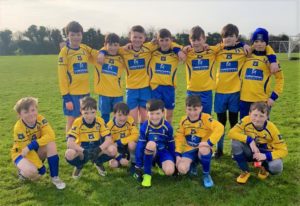 The Under-12A team got back to League action this morning after a break for a few weeks with Ben McCarthy captaining the side. It was Youghal Utd A who were visitors to Ballyadam on a cold but bright morning.

The game started very well for Carrigtwohill and the lads had spoken about importance of working hard for each other and the increased effort was very evident from the start. After missing a few good chances early on Martin Lehane opening the scoring on 11 mins which was followed by two more goals from Ben Horgan and Charlie Cambridge to make it 3-0 at half time.

In the second half Carrigtwohill controlled long periods of the game with some great passing. More goals followed from Charlie, Ben Horgan (2), Adam and Elijah. Youghal to their credit kept trying to play and put in a great effort to compete but the lads were just too strong for them on the today.

The most pleasing thing from the game was watching the lads trying things in the game from training and seeing their hard work pay off. Well done lads.

While everyone today performed superbly player of the match goes to Ben Horgan, he scored 3 but it was his willingness to try things pointed out to him in training and work hard for the team that stood out. Well done lads.

Player of the Match: Ben Horgan 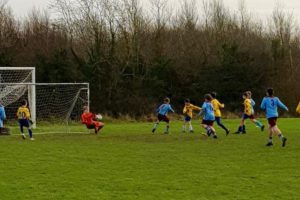