You are here: Home / homepage silder / U12A V Riverstown B 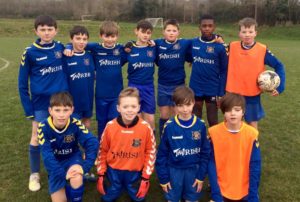 On a cold Sunday afternoon, Carrigtwohill United Under-12A’s made the short journey to Glanmire, to play Riverstown B Under-12’s in the Local Cup. This was a game where you were afraid to blink in case you missed something, as the final score shows.

Another week another starting eleven. Two of the Carrigtwohill lads Elijah O’Riordan and Liam O’Connell dragged themselves out of their sick beds, such is the dedication to their team.

Carrigtwohill stuck with their new formation with Adam and Charlie playing up front and in the middle John O’Connor was welcomed back into the holding midfield role that he has made his own this season. He was joined either side by Liam Coady and Darragh Thornton. As was the case with John, we were able to welcome Divine back into the team in the right back position with Ben McCarthy in the centre marshalling the defence, Liam at left back and of course the ever-present Ben Healy in goal.

The team is never complete without Peter Warren Perry who was joined on the side-lines by Elijah.

As the game kicked off, it wasn’t long to wait until the first goal was scored in a topsy turvy first half – a great corner from John found its way to the back of the net off a Riverstown player for an O. G.

While Carrigtwohill were in control of the game Riverstown were threatening on the break and in the 14th minute, as Carrigtwohill tried to play off-side, they were caught with a through ball that put the Riverstown player 1 v 1 with the keeper to score the equallizer.

Four minutes later it was 2-1 to Riverstown, when they scored an identical goal. Carrigtwohill gathered themselves and came back into the game and had plenty of chances to equalize with Adam and Charlie coming close on a couple of occasions.

The visitors got the goal they richly deserved after some fantastic passing movements between Liam, Charlie and John who fed the ball for Adam to score.

Three minutes later came the move of the match as Liam Coady, showing some great feet to play a one-two with Charlie and then again with Adam. He played a great ball to Charlie who had kept his run going and slid the ball past the on-rushing keeper 2-3.

As the first half came to a close Adam, got his second of a pulsating half.

With the second half under way the home side came out fighting and scored two quick goals
To make it 4-4. Carrigtwohill finally got going in the second half and started pressing and took control of the game, with Adam in particular, now chasing his hattrick, coming very close. The away side won a corner which John took and he floated a great ball to the back post where Liam Coady was waiting with a lovely cushioned header to make it 4-5.

The sixth and final goal came from a Riverstown corner which was cleared to Charlie who carried the ball forward before sliding an inch perfect pass to Adam to finally get his hatrick. Adam was also Captain for the day, so man of the match goes to captain fantastic Adam McCarthy for his tireless running and well-deserved goals. Great effort all round and a well-deserved win.