U12 v Wilton United A

U12 v Wilton United A

This second league match in the 2016 / 2017 season for our brave U12s turned out to be the proverbial “game of two halves”, played as it was on an exceedingly breezy day at Ballyadam.

The opposition of the day was Wilton A, who were on the back of two league wins and top of division 2, evidences of some good organisation and team play, and playing with the wind in the first half, it was indeed the visitors who started better.

In fact, they did more than start better, pinning Carrigtwohill in their own half and literally taking over the play for a full 15 minutes. It seemed only a matter of time before Carrig’s defence would concede and it did happen as a badly defended cross was riffled into the back of the Carrig net at the far post. As the half progressed, the match became more even, and Carrig had some chances, but a cross coming from the left turned into a shot in the strong breeze and Ruairi Adam in goals was unlucky to see the ball deflect in the goals from his hands. Still, a deficit of two goals at half time did not seem surmountable and Carrig took full advantage of the conditions in the second half, pinning Wilton in their third from the very start of the half. The pressure and persistence soon paid off and after seeing a first effort stopped on the line by Wilton’s backs, Ruairi Adam poked the ball into the net from close. 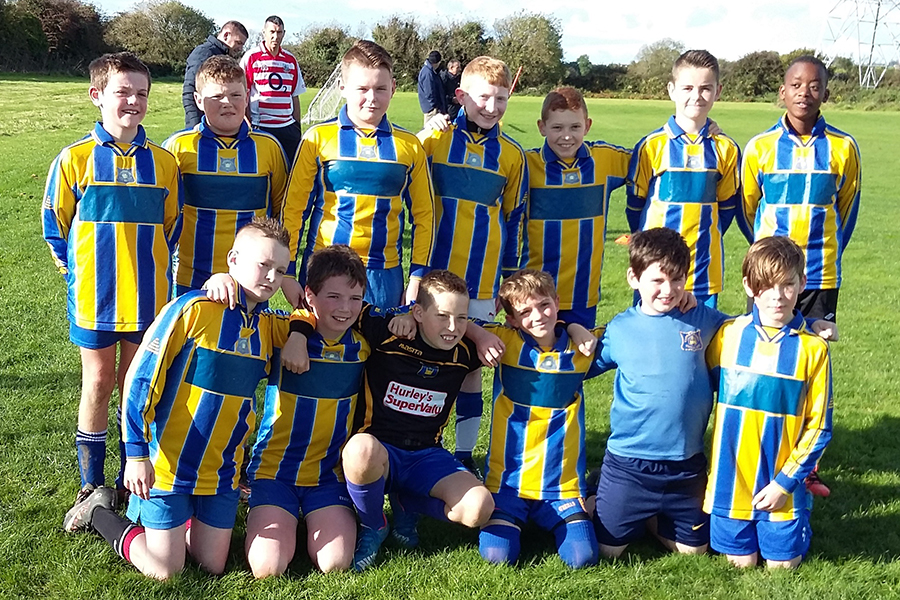 As Carrig pilled on the pressure, there were still opportunities for Wilton to hit Carrig on the counter and so they did halfway through the second half, with number 15 running around Carrig’s defence and shooting across goals, only to see his drive rebound off the inside of the right upright into the grateful arms of Kyle Graham, Carrig’s second half goal keeper! As unlucky as it was for Wilton, it was still superb goalkeeping to manage to recover so well and prevent any rebound strike.

Then Carrig took the bull by the horns and Wilton saw much less of the ball until the end of the match. One of the artisans of this domination was Cormac Murphy who worked very hard in midfield. He found himself well positioned to deflect a shot from Daniel Murnane into the far corner of the Wilton goals to tie the match. A few minutes later, he spotted the Wilton keeper off his line and unleashed a powerful shot at the near post with his favoured left foot to put Carrig in the lead. There were still a few chances at both ends, but there would be no more scoring and the win was there for Carrig who showed they really have a lot in the tank by completing a famous comeback.

The performance of all players was very good, Carrig’s defence kept Wilton out for most of the game Darragh Higgins who held the centre back position, with David and Ryan Todd, Adam Murphy and Ben O’Sullivan all worked very hard to get back behind the ball and defend their line. Zack Griffin, Ryan Wolfe and Ryan Deasy also worked very hard on the wing at different times to give Carrig the width they needed, whilst Daniel Murnane held the centre of the pitch as he does at every match. This is only the beginning of the season, but the signs are good and the players’ attitude on match day is excellent.

Player of the Match – Cormac Murphy