Both teams started very well and this was an instantly even game, with Carrig more trenchant in attack, but Mallow having more possession of the football, and delighting their fans with lovely passing play up both wings. Both goal keepers were excellent and showed their inclination to play keeper / sweeper early on. Ruari Adam in particular made a couple of interesting “Manuel Neuer impressions”, running way out of the box with the ball and passing the ball up the wings!

Midway through the first half however, Carrig’s pressure was beginning to tell and Cormac Murphy scored straight from a corner, which he had been threatening to do in previous games. His left footed curler evaded everyone and screamed in at the far post. A few minutes later, Ryan Wolf who was playing a blinder on his left wing, broke through and ran towards goals, rifling his low shot from close to leave Mallow’s excellent keeper stranded. 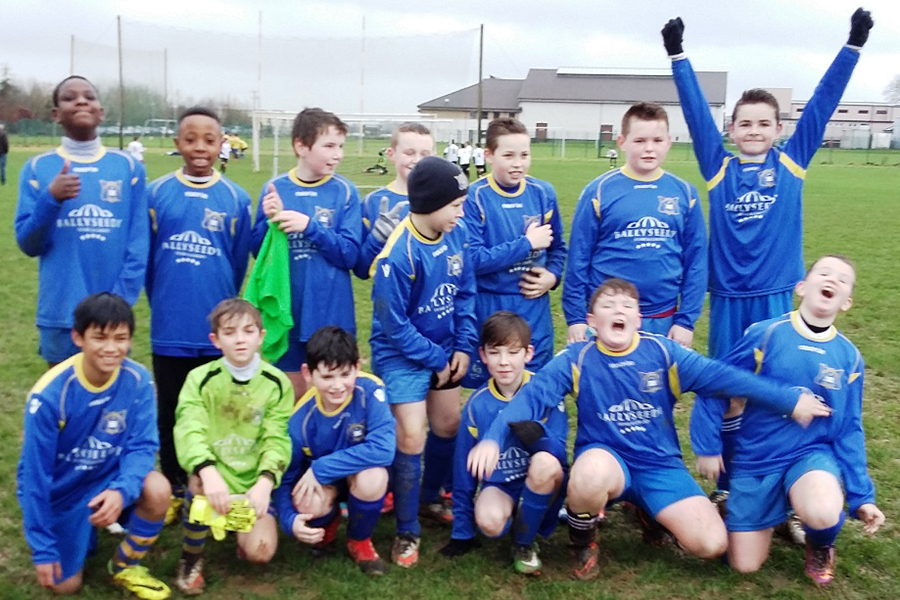 This was the score at half time but Mallow restarted the second half in completely different mood and the match turned into a real cup game with Mallow’s team playing much higher up the pitch and chasing the match like all depended on it. Carrig’s back three, with Darragh Higgins at full back, was well in place however and the midfield was also working hard, no one harder than Cormac Murphy who demonstrated yet again what a box to box player he can be. As Carrig were really on the back foot, Zack Griffin showed what defending is all about. Although playing up front, he played the extra man in the midfield and chased the runs through the middle like all coaches would like their players to do. Several times, he chased runners from one end of the pitch to the other, forcing them wide, slowing down the attacks and many times, clearing or recovering the ball.

Still, Mallow came back when Ruairi Adam, who had been excellent up to that point was caught off his line by a long range looping shot which he could not deflect over the cross bar. The pace of the game became even more relentless as Mallow through everything they had at Carrigtwohill in search of the equaliser, drawing a full stretch save on the line from Carrig’s keeper. Pushing so hard, however, opened up gaps at the back and Ryan Wolf did was he has been doing in many games this season and ran onto a long ball forward played above the heads by Kyle Graham, dribbled the last defender and chipped the ball to the left of the keeper from close. That made the game safe and Carrigtwohill’s players found their second wind to secure a more comfortable final few minutes, William Fatuga nearly putting Ryan Wolfe through on goals again with seconds to go.

All in all that was a job very well done, with the 13 players in the squad for the day rotating on the field to deliver the sustained performance which this match needed.

Player of the Match – Zack Griffin