You are here: Home / homepage silder / U12 V Carrigaline Hibs

Carrigtwohill United Under-12’s travelled to Ballea Park in Carrigaline to face Hibernians in the 1st round of the FAI National Cup this Sunday. Temperatures pitch side must have been in the mid-twenties as the artificial surface exaggerated the heat on a balmy late ‘summers’ afternoon. Both sides were tested to the limits in a tie that would go the full distance, extra time and penalties included.

A change in formation for the visitors would prove critical playing 1-3-1-3-1 to offer the defence protection through the centre and this would see Carrigtwohill hold Hibs goalless from open play over 80 minutes.

Following a keenly contested game with both sides using their squads intelligently in the sapping heat the deadlock was finally broken early in the first half of extra time by Carrigtwohill striker Cillian Rooney. A throw in from the right found its way to Roan in the centre and he slipped a ball in for Morgan to control who in turn found CillIan in space to finish well and give the visitors the lead.

Hibs had an equaliser 5 mins later direct from a free kick when their player drilled the ball into the bottom corner giving Adam in goal no chance. Extra time would see no further goals and so onto penalties with Kyle Kidney(c) winning the toss and electing Carrigtwohill to kick first.

Hero of the day Adam Lee in goal, saving two vital kicks and man of the match is shared between Roan O’Keeffe for his superb display in front of the back 3 and Cathal Seymour at CB.

Well done to all lads on the day, everyone played their part. 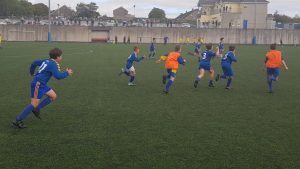 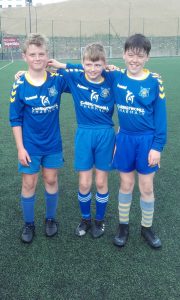