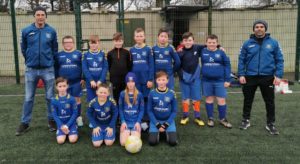 The Carrigtwohill United Under-11 boys and girls started very well, passing and controlling possession. Eoin Garvey, Gary Óg Horgan and Sofia Redmond took full advantage of their skills and teamwork in midfield pushing the whole team forward but it was Ramblers who scored a goal against the run of play.

Cal Flavin was outstanding in goal, made some fine saves and was able to ensure his kickouts were to his teammates.

The wind picked up in the second half and despite this, Carrigtwohill still managed to keep most of the possession. Ramblers used the gale well pounding down on the Carrigtwohill goal. Relentless defending from Alan O’ Brien, Sean Kenneally and Cillian McCann and cat like saves from the superb man of the match Cal Flavin ensured the Ramblers forwards only scored 3 more with all their possession.

Jake Newman, Callum Foley, Ben and Dylan Joyce ensured the away side applied pressure at the other end and their determination paid off when Ben scored a lovely team goal in the closing minutes. The management were very proud of the players effort and teamwork today

Player of the Match: Cal Flavin