You are here: Home / homepage silder / Leeds A V Carrigtwohill U13

4th May at Lees Park 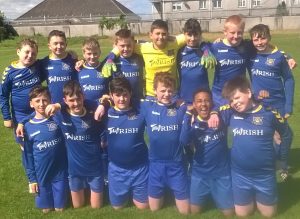 On a sunny fresh May Saturday morning, our Under-13’s travelled away to Leeds Park in Ballyvolane to take on Leeds A in the last 32 round of the Con Elliot Cup.

Carrigtwohill made a flying start to the game by taking the lead in the first minute, when Evan brilliantly finished after good front play by Ryan and some great work on the wing by Philip. Carrigtwohill went two up after 14 minutes when Ryan chipped the keeper from outside the box. The visitors were pushing hard for a third, working hard all over the field, and could have gone three up before the break only for the post preventing Matthew from getting a deserved goal.

At half time, Carrigtwohill were forced into changes with captain Josh having to come off with a shoulder injury. But he continued to impressively lead the team from the side line.

The lads flew into action again with a third in the first minute of the second half, with Evan scoring a second through a well taken right footed shot, after a great through-ball from midfield. Carrigtwohill were well on top at this stage. However, Leeds came back at us, scoring from a quick break out after a corner on the other end of the pitch. Three – one.

But fair play to Carrigtwohill, they gathered themselves again and were pushing for more goals. Evan was unlucky not to get his hat-trick from a corner, and Charlie, Cillian and Philip just missed with good long distance shots. Callum and Akrum provided some good touches in our front lines, helping in the build-up to many of the chances being created.  The defence was defiant, with Ben & Robbie as hard working as ever. Full backs Corey & Cathal had excellent games, winning their individual battles on the wings, prevent crosses and helping out as attacking treats. Filip was commanding in his goals, continually talking to his defence, coming off his line to snuff out any goal treats and pulling off a brilliant full stretch save near the very end.

The sportsmanship of the Leeds players and management on the day needs as special mention. It was brilliant to have experienced such friendly opposition in a schoolboys cup game and the genuine good wishes of the Leeds Manager Martin and his players made a big impression. Fair play Martin and best of luck to you and your lads for the seasons ahead.

Great credit to the whole of the squad on what was a brilliant team effort in an enjoyable cup tie. Man of the Match deservedly goes to Matthew, on a day when he was positive in his control and team play!

Player of the Match: Matthew Bernard