Innishannon U17 Vs Carrigtwohill United U17

Innishannon U17 Vs Carrigtwohill United U17
Date : 2018-09-23
Team: Under-17
Venue: Innishannon
Opposition: Innishvilla
Competition: League
Carrigtwohill Scores: Rian Notley (2) and Ebe Imho
Carrigtwohill Score: 3
Opposition Score: 0
Player of the Match; Alex Canti and Ronan Ymedji at centre back
Report:
Carrigtwohill’s U17s travelled to Innishannon to play the next instalment of their league campaign.
Innishvilla is an old rival – the two teams having played in the same division for the last 4 seasons with results having gone one way or the other.
On the day, the conditions were quite good except for a strong breeze which blew mostly down the pitch. The draw decided that Carrig would play into the breeze in the first half and this meant the visitors were under quite a bit of pressure initially. It took about 15 minutes to adjust and Darren Flynn in goal was beginning to find more length on this kick outs.
There were a 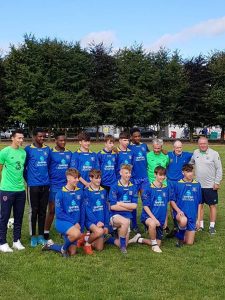 few chances in the first half, although Innishvilla’s forwards did have two half chances which were promptly closed down by Carrig’s centre backs Alex Canti and Ronan Ymedji.
The second half was different from the outset with Carrig finding more space on the ball, especially in midfield and beginning to play higher up the pitch. As the minutes past, the 1 4 3 3 turned more into a 1 4 4 2, with Rian Notley and Jason Daly playing close to each other upfront and creating mayhem in the Innishvilla defence. Still the game was levelled and both sides had similar chances with promising chips from distance which the strong wind deflected away from goals. Then with 25 minutes to go, Robert Adam received a ball out of defence on Carrig’s left wing and played a defence splitting pass up field. Rian Notley ran onto the ball and his shot deceived the Innishvilla keeper at his near post.
Only 3 minutes later and a similar through ball found its way to Jason Daly whose angled shot was only parried by the Innishvilla keeper only for Rian Notley to net his second of the afternoon.
Ten minutes later and more pressure from Carrig delivered a corner kick. Robert Adam played a hard ball in, which Ebe Imho, at the near post, rose to head into the far corner of the net: a quality delivery and a quality header for a quality goal – the third for Ebe this season.
A great afternoon of soccer and a great result for Carrig in a match that was much tighter than the scoreline suggests.
Martin Cambridge2018-09-23T21:34:11+01:00