5th May at Whitegate 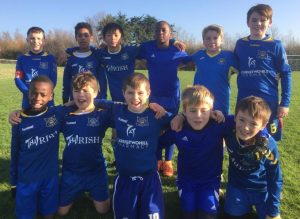 This was a typical cup game in which anything could have happened. Corkbeg turned up with clear intentions to cause an upset. It was made clear to the Carrigtwohill players that a clean sheet was the priority as goals were guaranteed to come. This game was a balanced affair for most of the early part with the most threat coming from the Corkbeg left sided attacker.

As the game approached midway through the first half, Carrigtwohill played some good football going forward with lovely exchanges that saw Rolie open the score-line.

Carrigtwohill gained momentum and deservedly got a second goal. A vital interception by Amany in midfield saw the ball come to Alex  O’Sullivan who found Alex Kingston, who in turn laid the ball into Rory Dolan’s path to coolly finish with a rasping low shot.

Corkbeg looked dangerous each time they attacked down the left flank. Brian Healy had a lot to do and was helped by Colm who did well to provide cover as their pacey and tricky winger caused trouble down that wing. The message was clear as our back three looked uncompromising with quick recovery and pivoting moves.

The second half came and Corkbeg made a few substitutions that turned the scale in their favour. On 2 or 3 occasions Dennis was forced to double up with Colm as pressure mounted. On a day we demanded a clean sheet, credit goes to the defence and midfield who got to the ball first each time Corkbeg cleared the ball out of their own half.

A shift in midfield saw Alex O’Sullivan push forward and Amany provided stability in midfield. From then on Carrigtwohill piled pressure and made few more attempts on goal. From a free kick, Alex O’Sullivan got a strong strike on goal that was saved before he followed up with another rasping shot to put the game to bed.

On a day like this it must be mentioned that all the kids did well playing to instruction. They put the corner kicks drills into practise, got to the ball first, covered for each other well, scored a beautiful team goal (second goal).  But above all Man of the match deservedly went to Alex O’Sullivan for creating second goal and scoring a third when Corkbeg was threatening to get back into the game.

Player of the Match; Alex O’Sullivan