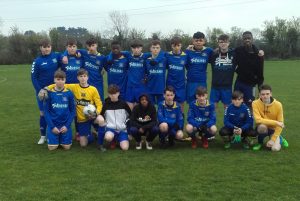 Last Tuesday evening Carrigtwohill, Under-16’s resumed their league campaign at home to Midleton. Being a local derby and with both teams looking for maximum points it was fiercely contested affair. Clear cut chances were hard to come by between two very evenly matched teams and Alex Sheehan saved well for the home side midway through the 1st half from the Midleton striker, while Carrigs best opportunity fell to Niall Harte on 33 mins after a meandering run from defence through midfield from David Joseph.

The 2nd half followed a similar pattern with the home side finding it difficult to penetrate the visitors rear-guard and always wary of the Midleton counter attack but on 65 mins came the breakthrough when Midleton scored what would turn out to be the decisive goal. Calvin Fitzgerald had a long range free-kick just sail over late on and Carrigtwohill had a genuine penalty shout in the final minute when David Joseph was upended in the opposition box but it wasn’t to be and Carrigtwohill tasted defeat for only the second time in nine games.

This effectively ends the home sides title charge and puts Midleton right in the mix, special mention goes to ‘man of the match’ Eric O Sullivan who had a superb game at left back not only performing his own defensive duties but also covering those around him for 80 mins. Well done to all involved.

Man of the Match : Eric O’Sullivan