Carrigtwohill United U16 V Avondale A

Carrigtwohill United U16 V Avondale A 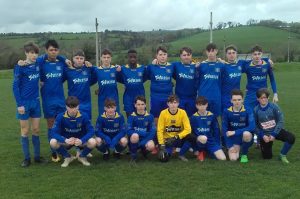 Last Wednesday evening, Carrigtwohill United Under-16’s welcomed Avondale A to Ballyadam Park in the Joma Local Cup with a place in the last 16 the reward for the winners.

The opening ten minutes were pretty even with both sides feeling their way into the game. The home side had a few speculative efforts from distance but nothing to trouble the Avondale keeper. As the half progressed Carrigtwohill started to dominate and created some good openings on the right side with David Joseph and Calvin Fitzgerald working well together but the final ball or shot just not coming off.

Niall Harte saw his brilliant left foot curler strike the angle of the goal frame just before halftime and the home side would go to the break slightly frustrated at not being ahead.

The second half resumed with Carrigtwohill again making all the running and it felt like only a matter of time before the breakthrough goal would come and sure enough on 55 mins Fitzgerald and Joseph combined well the latter sliding the ball under the advancing Avondale keeper to round off a great team move.

On the hour mark Daniel replaced Cian Leahy who had a solid game at left back and the home side kept pushing for a 2nd goal with both Calvin and Niall going close. As the game headed to the final minutes Avondale had no choice but to throw everything forward in search of an equaliser and this was to their peril when Calvin picked up a loose ball on the edge of his own area and carried it down the left flank, seeing the Avondale keeper was scrambling back from the halfway line he drove forward and finished well from close range to put the tie to bed.

An away trip to Riverstown A in the last 16 now awaits, well done to all involved. With so many good performances all over the pitch man of the match is a tough one to call but David Joseph just shades it for his unrelenting running, energy and direct forward play.