This Saturday, Carrigtwohill played host to Passage AFC in the latest round of league games. With both clubs very likeminded in their approach to the games, it was sure to be a good run out for all the boys. Both teams approached the games in a competitive but fair manner with the focus on playing football. 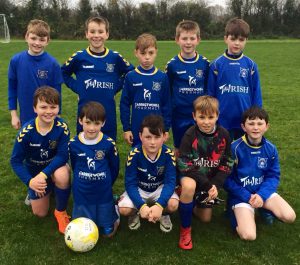 The conditions on the day were damp and dreary but the football produced brightened up the afternoon. The day was all about fantastic team performances. The work rate was superb throughout, defences solid and well organised by our goalkeepers. The way the teams are set up is to attack and pass the ball and the boys did that in abundance today. The movement and vision were superb. The decision making today while on and off the ball was very impressive, something the lads have worked really hard on in training and they produced some great team goals. Throw into that a couple of spectacular individual goals and the odd rabona and the result was a great day out for the lads.

The most pleasing thing was the way both teams performed, everyone involved working for each other and having great games but a couple of lads deserve a mention today. Cillian Rooney and John O’Connor for one team and Tom Walsh and Liam Coady on the other team. Well done to all lads…