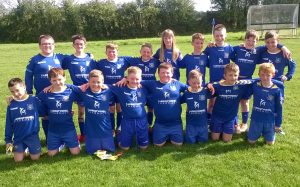 On a lovely sunny Sunday afternoon in Ballyadam, Carrigtwohill Under-10’s took on Mallow United A in a keenly contested CSL fixture. The clubs played out 2 side-by-side  7 aside games, following the FAI Player Development guidelines.

There were loads of brilliant efforts, skill and team play on view during the games and it is clear to see that these Under-10’s are growing as players with every round of CSL games. These non-competitive small sided games are proving very effective in helping these young players to develop their skills, but also their understanding of the game.

While Mallow were a little stronger on the day, it was a very useful set of games in the further development of the squad. Many of the things being worked on in training every week are being brought into practice by the players and it is great to see their commitment and eagerness to try new skills and tricks – a sure sign of growth, confidence and joy in playing football.

A big thanks to the visitors on the day – Well done Carrigtwohill Under-10’s – keep up the good work!