Carrigtwohill United U13 finally returned to competitive action following more than seven months without a fixture. A return to training in early August saw the squad retain the same 16 players as last season and the sessions have been detailed to progressing from the smaller sided games to 11 v 11 and full goal size and pitch size.

A fairly daunting task for any 12 year old standing in goal and looking down a field of over 100 metres in length but this bunch have taken it all in their stride and have trained well over the last month.

The setting was Ballyadam Park on a beautiful September morning, the opposition was Pearse Celtic (newly promoted from division 2). As with all schoolboys games on this first weekend back a minutes silence was held before kick off in memory of all those who fell victim to covid 19 and this was impeccably observed by both teams.

Carrigtwohill United lined up with captain Adam Lee in goal, the centre back pairing of Cathal Seymour and Osas Aghedo were flanked by full backs Ronan McCarthy and Jarlath Cullimore. The midfield was anchored by Roan O Keeffe who had Tom Walsh and Morgan Foley playing just ahead of him to the right and left respectively. They would provide the ammunition to a front 3 of Rian Thornhill, Cillian Rooney and Kyle Kidney in a 1-4-3-3 formation that had been practiced tirelessly over the previous month. Noah Eddins, Sean Og Madden and Noah Nsengiyumva waited eagerly in reserve.

The game of football that ensued was well worth the wait as Carrigtwohill dominated from start to finish. Brilliant distribution, assured defending, combative midfield play and deadly exchanges and finishing up front saw the home team lead 7 – 1 at half time, Rian bagging 4 goals to go with Cillians brace and Kyle’s one. The second half followed the same pattern although Pearse Celtic would reshuffle to shore up their defence. The introduction of the 3 Carrigtwohill United substitutes helped to keep the tempo high and ensure there would be no way back for the visitors. Cillian added two more goals (1 pen) early in the second half before Pearse replied with two strikes of their own but ‘ man of the match ‘ Rian Thornhill would have the final say scoring his 5th goal and Carrigtwohill United’s 10th goal of the game with twelve minutes to go.

Well done to all involved, a fantastic start to the season for our U13 Division 1 side and a huge thanks to all at Carrigtwohill United for making the return to football such a smooth transition.

Player of the Match: Rian Thornhill 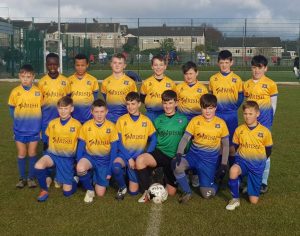