Last night was just one of those nights! The pride felt by coaches in seeing how our young heroes performed last night is truly immense. The lads really had to soak up a lot of pressure and to come out the other end after 80 gruelling minutes of football (including extra time) to regroup and composed in a penalty shootout…wow….SO PROUD!!

Next step is the semi-final and our Cup journey continues!

The game itself started with Carrigtwohill under a lot of pressure from Youghal’s very powerful midfield. The defence stood firm, in fact our defence with the excellent Sebastian in goal, Jayden, Dennis and Colm were superb all night. Colm led by example throughout not just through his tenacious defending, but he expertly organised his defence throughout while continuously encouraging his teammates. After withstanding early pressure, they were unlucky when a slip in defence, on what was becoming a very wet surface, led to the Youghal striker finishing into the bottom corner. 1-0 Youghal.

Carrigtwohill talisman Rollie Durango pulled them level later in the half, with a terrific solo run and lovely bottom corner finish. Another fabulous finish by Rollie.

The second half was more of the same, with tired legs becoming a factor. Carrigtwohill carved a few chances of their own with Rollie’s huge efforts up front leading to their best chances. It was a tough night for the midfielders as Youghal were very strong and powerful with runners continuously putting Carrigtwohill on the back foot but Amany, Alex L, Alex O, Rory, Ethan, Alex K, Leslie, Brian – all played their parts throughout the night in being first to the ball and grafting hard when playing. It was a hard slog in that midfield last night! So kudos for the work put in by all the midfielders.

So, it went to extra time.It became a bit of a blur ? but Carrigtwohill got a free outside the box when Rollie was taken down. Alex O launched a rocket that the Youghal wall blocked but Amany was on hand to finish down the centre. 2-1 to Carrigtwohill!

Shortly afterwards Rollie was on hand to give a typical, cool bottom corner finish after he pounced on a defensive error. Now it was 3-1 to Carrig. Unfortunately, they lost their focus a little bit and really from the kick off Youghal got through to make it 3-2, and then in the second half of ET a terrific strike made it 3-3. Backs to the wall as Youghal had the momentum but our boys stood firm. We have seen many teams fold after similar occurrences (Barcelona in this year’s Champions league semis!) but the Carrigtwohill lads dug deep, and finished after 80 minutes of football with a 3-3 scoreline!

Penalties! Dennis slotted his peno down the centre to score and Rory nicely placed his with power into the left side middle of the goal. When it came to needing a cool head on the final penalty, no better man than the unflappable, super composed Jayden to go the same side as Rory to beat the keeper, again with power. Our keeper, Sebastian, has to get a special word….Outstanding! A brilliant dive to his right to save the first (a really powerful shot, brilliant save!), the third he got done well to save a low shot, he dived to this left for the 4th and almost, almost got to it but the final peno of the night  – a dive to his left to brilliantly save and get us through to the semi. 3-2 Carrigtwohill on penos! Callout for Alex K too who was ready and willing to go to sudden death and take the next penalty!

A brilliant night for the kids and coaches! One of those nights! A huge callout to all our players last night for their passion and commitment on the pitch when called upon, the unrelenting support of their team mates and respect for the opposition, Sebastian, Dennis, Colm, Jayden, Amany, Brian, Alex L, Alex O, Alex K, Rory, Ethan, Rollie, Kevin, Noah, Cian, Leslie …take a bow lads!

A callout for parents and fans too! The clapping of the Youghal players at the end was a lovely gesture. And the support of the players throughout, always encouraging, gave players and coaches a boost throughout!

Off the semi-finals! And a dream of Wembley!!! 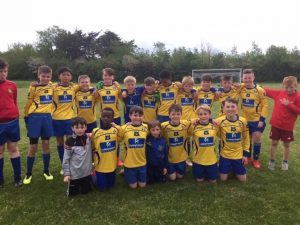