The club held an end of year annual AGM to mark the end of season for all leagues including our own. It was a memorable occasion as the majority of the Under-12’s had a chance to meet for the second time the Heroes of this year’s Corinthians Cup. A lot of our kids thronged Turners Cross as Carrigtwohill United ran outright winners against Cathedral Celtic where Phil Wade scored what looked like a goal of his lifetime.

Friday night’s Awards NIght was a special occasion for the Under-12’s as they were presented with their medals for winning promotion to first division. The success of Carrigtwohill was heavily built on a strong backline where Colm led the team from the back. He was an icon for the club as he represented us as the only Carrigtwohill player to have made the Cork City squad at Under-12. It is no wonder we conceded the least number of goals in the league.

However, our player of the year award deservedly went to a player whose side almost won every small sided game during training and that you never had to caution at training or matches. A player that literally carried the team throughout the season, scored double the goals of his closest challenger and most notably got a hattrick against League winners Leeside who only defeat was against Carrigtwohill United in their own backyard. (Carrigtwohill United emerged 3-2 victorious with a Hattrick from Rolie to mark the biggest win of our season). Player of the Year is Rolie Durango

The team is still in the Conboye Cup semi-final and hopefully will have a chance to win it. 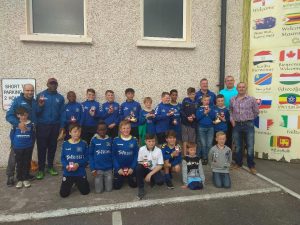 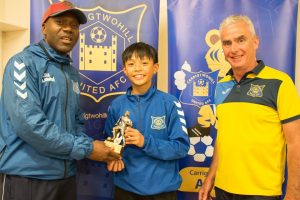