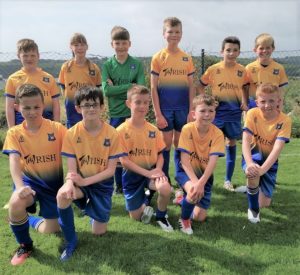 Carrigtwohill were welcomed to Madden park by a strong Kinsale A team and after a tense opening few minutes in which both teams gave their all, it was Carrigtwohill who eventually began to assert dominance in the match.

Cal Flavin in goal was in confident mood and made numerous important saves. The back line of Sean Barry, Cillian McCann and Conor Nolan put in a huge effort to contain the Kinsale threat and managed to launch a number of attacks through some well-timed tackles and some clever passing.

The midfield of Pol O’ Connor, Eoin Garvey, Jack Lombard and Cathal Doyle must have covered every blade of grass on the pitch in an effort to break the deadlock , while the impressive Robert Cotter ran his socks off as the lone forward often having to compete with 3 defenders and still managed to create chances for himself.

Although Kinsale team were defending valiantly, Eoin Garvey’s incredible speed and mazey dribbles had them on the backfoot and the breakthrough came late in the first half when Conor Nolan produced the goal of the match with an unstoppable thunderbolt into the top left hand corner of the net. Pol O’Connor was masterful in the holding midfielder role as he snuffed out many of the attacks and had the Kinsale team chasing shadows.

After halftime, Carrigtwohill came out determined to build on their slender 1-0. Jack Lombard was running tirelessly and keeping Kinsale guessing with some tricky footwork and he split the defence open early in the second half with a sublime pass that was converted with aplomb by Sophia Redmond as she dispatched the ball with her left foot into the corner of the of the goal leaving the Kinsale goalie with no chance.

Cathal Doyle  was moved up front for the remainder of the match and was eager to prove a point as he managed to bag 2 goals in the last 20 minutes of the match. Fionn Sheehan a late call up to the squad was in flying form as he put in some telling tackles and picked out some smart passes to keep Carrig on top.

But Kinsale were not finished and managed to grab a goal with an unstoppable shot but in the end the away side managed to see out the match. Overall a superb performance by the Carrigtwohill Under-12 team in their opening match in the Cork School Boys league.

Player of the Match: Eoin Garvey